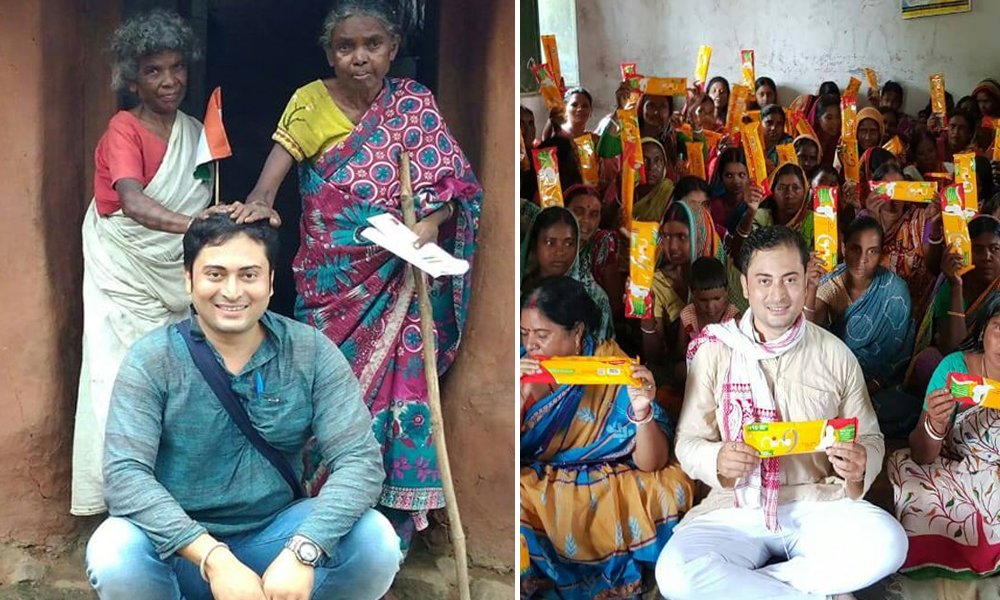 During his interactions with the villagers, Mangesh Jha was alarmed to find out that most women used grass, sand, ash and even cow dung mixed with husk as pads during menstruation.

From restrictions on touching utensils and entering puja rooms to the hush-hush around buying sanitary napkins, the taboos around menstruation in India seems a long way from being over. With the stigma around menstruation rampant across the country, conversations around menstrual hygiene often take a back step. And when it’s a man that’s championing the cause, it gets all the more difficult to raise the subject with women, especially those belonging to the rural areas.

However, 31-year-old Mangesh Jha, popularly known as ‘Padman of Jharkhand’, has taken it upon himself to educate the women in the villages of Jharkhand. Undaunted by the challenges, the youngster has been on an advent to end the taboos around menstruation and to impart the habit of menstrual hygiene to rural women.

“During the Ambubachi Mela, we worship Goddess Kamakhya to celebrate her menstruation – our mythology says that Goddess Durga bleeds for four days. We consider this as such an auspicious event and celebrate it with all fervour. But what about the Durga in our own homes – our wives, daughters, and sisters?” asks Jha.

India has nearly 336 million menstruating women and adolescent girls. Of this, only 57.6 per cent of young Indian women (15-24 years) use a hygienic method of protection during their menstrual cycle, reported the National Family and Health Survey (2015-2016). In Jharkhand, only 49.6 of women followed hygienic menstrual practices and the figure stood at 39.4 in rural India.

According to data collected by the Ministry of Health, only 12% of women and girls have access to sanitary napkins. While there are several government-run programs to distribute sanitary pads, these often do not reach the grassroots.

Alarmed by these staggering figures, the youngster from Ranchi quit his job in 2013 to champion the cause of menstrual hygiene. Today, he has influenced nearly 1500 villages across Jharkhand and around 6000 households to practice menstrual hygiene.

Jha completed his graduation from Institute of Hotel Management, Bhubaneswar, in 2008. He then worked with hotels in Kolkata and Pune before moving to Ranchi in 2013.

While in Ranchi, he would travel around the city during weekends. “While Google had painted a pretty picture of Jharkhand, the reality was different,” he recalls. It was when he realised the plight of the villagers on the outskirts of Ranchi that the youngster decided to bid adieu to his job. While he started out by providing night school to the villagers, he soon began helping them with farming and employment.

As he got more involved with the villagers, he was alarmed to find out that most women used grass, sand, ash and even cow dung mixed with husk as pads during menstruation. Back then, Jha barely knew about menstruation or what a sanitary pad even looked like.

He then went home and told his mother about his interest in spreading awareness about menstrual hygiene. “My mother didn’t speak to me for seven days when I told her about my decision,” Jha recalls.

However, once Jha explained to her about the predicament of the villagers, his mother was the first to extend a hand of support. While his mother and sister helped him understand menstruation better, he researched about ways to help.

The Darker Side Of Sanitary Pads

While sanitary pads are crucial during menstruation, they pose a number of threats – environmental pollution being one of the biggest. Improper disposal of sanitary pads is not only extremely harmful to the environment, but it can also spread various diseases.

“After the release of the movie Padman in 2018, there was a sudden spike in the number of people that visited villages to distribute sanitary pads. While this helped the villagers, it also led to an increase in sanitary waste. If every woman in these villages started using sanitary pads regularly, can you imagine how huge a threat it posed to the environment?” asks Jha.

On an average, a woman uses around 10,000 sanitary pads in a lifetime. This means that a single user can generate nearly 125 kg of sanitary waste. According to reports, India creates a shocking 1.13 lakh tonnes of menstrual waste annually. These can take over 250 years to decompose fully.

To reduce the pile-up of sanitary waste, he educated the women to also make use of clothes during menstruation, a knowledge imparted to him by his grandmother. In addition, he also instructed them about various hygiene measures that were imperative while using clothes, like using a disinfectant while washing and proper sun-drying before use.

“While using clothes also reduced the impact on the environment, it also cut down on the financial burden on the women,” he says.

An ardent follower of Swami Vivekananda, Jha believes in making the villages self-sufficient.

“I don’t want any community to be dependent on me. Whenever I spent nearly six months in any village, I ensure to educate them to the extent that they are not dependent on me in the future,” Jha says.

“I work on the philosophy of Swami Vivekananda, who said, “If you downpour the entire world economy in one village, that village won’t progress unless and until they don’t want to stand on their own feet”,” he adds.

Realising that his efforts alone cannot bring about change, he sought the intervention of the government in championing his cause. In about 5-6 villages, he worked with Asha and Anganwadi workers to mentor adolescents.

“While the government has several programs to provide free pads in schools, I want it to be channelised through these Asha workers, who will work as mentors to these adolescents. They will talk to the kids and their mothers to help bust the myths around menstruation,” he explains.

“As these mentors talk to the kids during each cycle of their menstruation, they would eventually be educated enough to buy sanitary pads and take care of their health on their own. This is what I envision for my state and my country,” Jha adds.

“I want the government to set up manufacturing units in some villages through SHGs (Self Help Groups). However, it should be strictly ensured that the pads produced should be biodegradable. This will also provide a livelihood to the villagers,” he says.